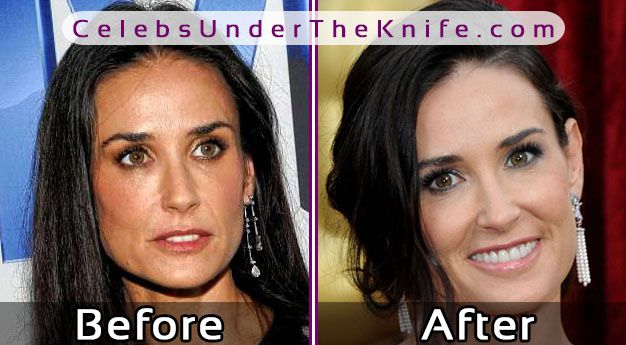 Demi Moore is talented. Demi Moore is beautiful. And Demi Moore is old. But nobody really gets that. Of course with the career and resume Demi has accumulated over the years, it will be odd for anyone to think she is anything other than beautiful or talented. You’ll find a range of discussions below regarding Demi and any plastic surgery she’s possibly had, as well as a bit of general info about her.

Some of you may know her from her early acting days when she starred in films such as Ghost (1990), A Few Good Men (1992), and of course, we can’t leave out the one and only, Striptease (1996). Arguably her most famous role, check out the Youtube clip here [NSFW WARNING]. More recent films which you may remember her from including Charlies Angels (2003), where she shows off her awesome beach body, and Margin Call (2011).

Don’t count her out just yet though! Her acting career is still alive and well. Demi has two movies set for release in 2017 – Love Sonia and Rough Night. Hopefully, in a few more years we’ll be able to add some more pics to her before and after photos below!

When we say Demi is good, we mean it. Her stunning body and outstanding acting skills have racked up two Golden Globe nominations, another 13 wins, and more than 25 more award nominations. It’s no wonder she keeps getting cast! Of course, with more years comes more age, and that can have dreadful consequences on an actor’s career. Sometimes, just sometimes, they turn to unnatural methods to keep them looking young.

We’re talking about plastic surgery and whether or not Demi has had any. We know, you’ve been wondering the same thing – which is why you’ve landed on this page. Good, because we’re here to answer those questions.

Going by her looks, Moore is pretty young, it seems. Her skin is perfect, her cheekbones are sharp, and her nose is upturned. And wrinkles – she has few of them too. Anyone who has not seen Demi Moore in older day movies can be easily fooled into believing that Demi is in the prime of her youth – which she isn’t.

Maybe the stress of her 8-year marriage ending with Ashton Kutcher became too much? So much so, she had to go under the knife and visit a talented surgeon to boost up her confidence again. Let’s find out.

One last thing! Feel free to check out her Twitter feed or Facebook page for the most recent photos of Demi. There are nearly 8 million fans following her so there’s bound to be loads of interesting discussions.

Signs of a nose job?

By far, one of the most commonly asked questions about Demi and her physical appearance is whether she’s had a nose job or not. We here at CelebsUnderTheKnife.com like to call the times we currently live in as the Age of the Nose. Why? Because every man, woman, and even their dogs are getting nose jobs! Ok maybe not dogs, that will be the day…

Nose jobs, or rhinoplasty and they’re referred to in the professional field, continue to increase in popularity each year. Just take a look at this report from USA Today –  during 2016 there were more than 223,000 noses which went under the knife! Increasing by 6% over the past year, incredible stuff.

Now you know just how popular the cosmetic procedure is, and most of the time it is in fact purely for cosmetic purposes, let’s find out whether Demi’s joined in or not.

Sorry to crush your dreams – but the evidence just doesn’t seem like she’s had one. For example, check out the single before and after photo below this section. There is a vast difference in age, around 15 years or so, and her nose looks extremely similar on both sides.

Trust us, if there were any signs at all of surgery on her nose, we’d be pointing them out – it’s what we do. But when there isn’t, we don’t pretend there is, and this is one of those times. The overall shape of her nose, curve and height of the bridge, as well as the base and nostril flare all remain unchanged before and in the alleged after photos.

Keep in mind, this is just our opinion! You’re more than welcome to form your own, we’re just here to provide a medium for you do to so. If you’re interested, feel free to check out Jennifer Grey (the girl from Dirty Dancing and Ferris Bueller’s Day Off) to see some of the clearest evidence of a nose job. She even regrets it:

It was the nose job from hell. I’ll always be this once-famous actress nobody ­recognizes because of a nose job. 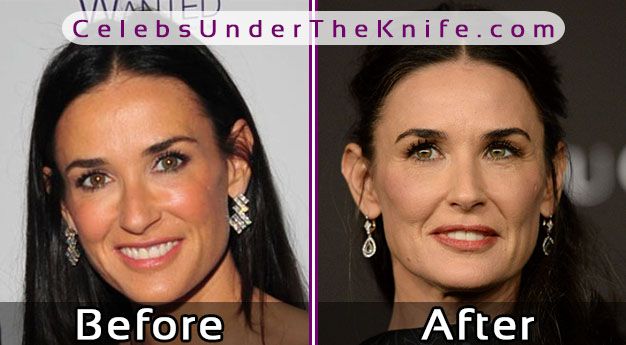 We talked about her famous role in Striptease above – if you haven’t seen it, she get’s completely topless in it. Quite likely one of the reasons the movie shot her into Hollywood stardom nearly overnight. And they didn’t appear just once either. In multiple scenes throughout the movie, Demi’s bare breasts were staring right back at you.

Most of the blokes probably couldn’t contain their grin, but we’re here on a mission! And that mission is to confirm Demi Moore has indeed received breast enhancements. The perfect roundness and overall perkiness of her breasts in the film simply don’t match up with the rest of her body at all. We won’t post the photos here as they’re truly NSFW, but you know how to find them if you’re interested.

It’s been rumored time and time again Demi has spent more than $125,000 on plastic surgery throughout the years. It may be completely for the boob job (they can get pretty expensive for highly specialized surgeons), or there could be some other procedures here and there thrown into the mix. Have you noticed something strange, though? Her boobs have decreased again!

Yep – Demi removed the implants following her role in Striptease. Just shows how dedicated Demi is to her acting career – actually changing the physical composition of her body to land a role!

We have a whole section dedicated to boob jobs if you’re interested. And let us tell you, some of them take it WAY too far.

One of the only procedures where it can be damn hard to tell if someone has been injected – botox. Done properly, botox can be an extremely subtle and effective procedure to combat the signs of aging. Not only combat them, some people (males and females) are starting to use botox as a preventative measure as well. How’s that for awesome?! Beating the wrinkles and crow’s feet before they even start appearing!

As for Demi, she was born in 1962, which makes her fairly close to the 60-year milestone. Our highly technical opinion (not really) has come to the conclusion Demi must have used some sort of unnatural procedure along the way. Her face, to this day, remains practically wrinkle-free. Unheard of for a female actor nearing 60 years old.

Especially in such a high-stress situation, and constantly being portrayed by the media for the whole world to see. We’ve seen some photos where they’ve zoomed so far in on her face, you can’t even tell it’s Demi anymore! That’s just taking it too far.

If you want to see botox injections gone wrong, look no further than Joan Van Ark.

Alright! You’ve made it to our favorite part, hopefully, yours as well! Demi’s been acting for a pretty long time now, so her transformation is one of the longest we’ve ever covered.

Without further ado, follow Demi as we see how she looks before and after 25 years in the Hollywood industry.

Heading way back to 1982, the frame below is from the movie Parasite. You can see her natural beauty shining through here, being just 20 years old at the time. 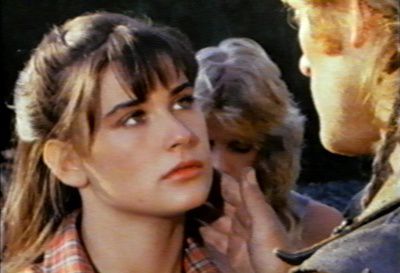 It wasn’t long until both her and we’re assuming many producers and directors became aware of her beauty. Demi is playing Laura Victor in the 1984 film No Small Affair. 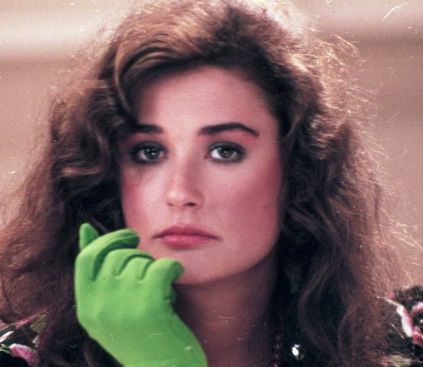 6 years later and she takes the length of her hair down a few notches for her role in Ghost. 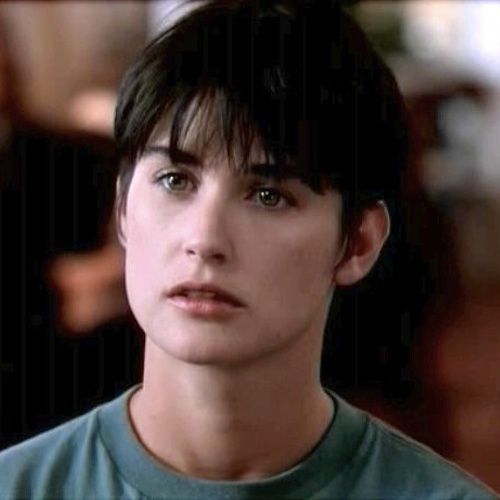 We actually weren’t entirely sure if this was her or not in the photo below. It’s been clipped from the film Disclosure, but the just looks so different compared to the above photo, strange stuff. 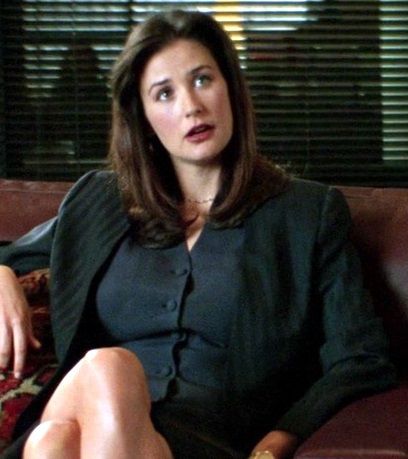 A year after her famous part of Striptease. She went from the gorgeous high-class dancer to a bald army character in G.I Jane. Just goes to show how versatile her acting skills are. 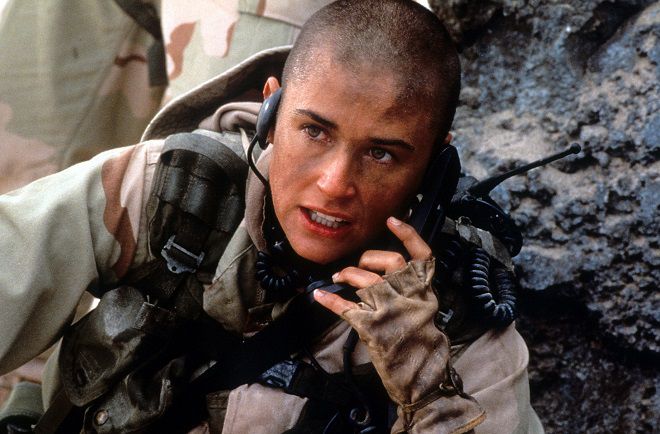 Can you guess which movie this is from? Demi only had a single movie she starred in come out in 2000. Any takers? It was Passion of Mind. 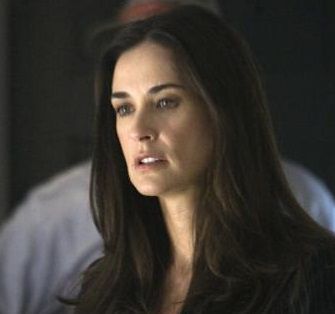 If there was one photo of Demi we simply couldn’t leave out, it was her sexy role in Charlies Angels: Full Throttle. She plays a villian, and a damn attractive one at that! This photo also shows she no longer has the breast implants with her. 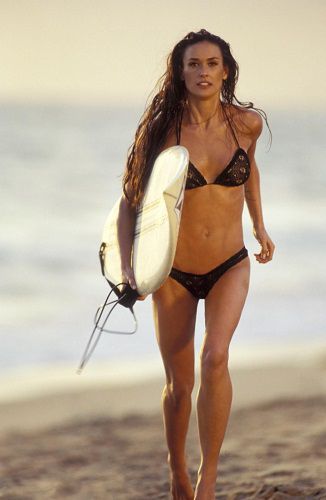 What lovely hair she has in the image below! The still was taken from her ’06 film – Bobby. It showcased the story of the Robert F. Kennedy assassination (not to be confused with John F. Kennedy). 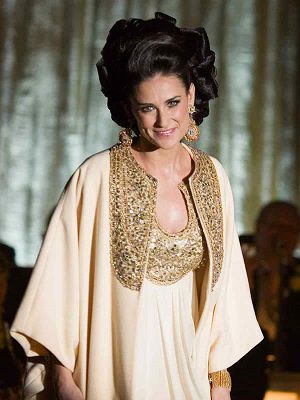 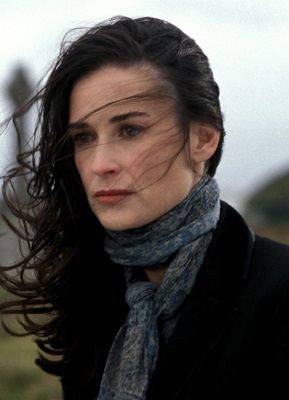 Nearing today status. You’ll notice her face it still as lovely as ever, showing few signs of the natural agin process. Botox anyone? 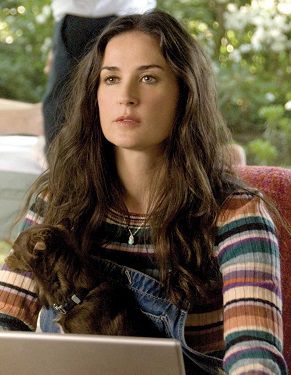 Her role in Margin Call. If she did get botox, she got it for this role. Her facial expressions in the movie barely change, literally. 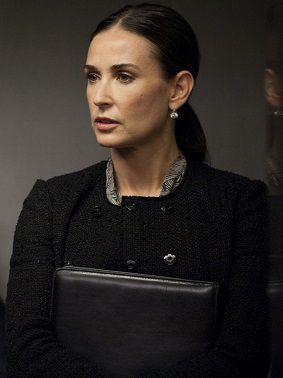 Demi at a media event in 2013. Her acting career took a slight downturn during this period, only appearing in a single movie. 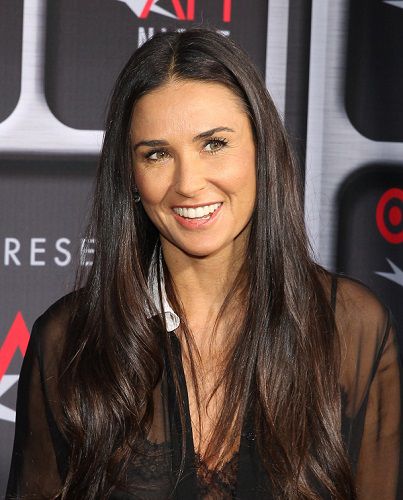 You can see from the first photo below, it’s starting to happen. She’s beginning to half look like her natural age! 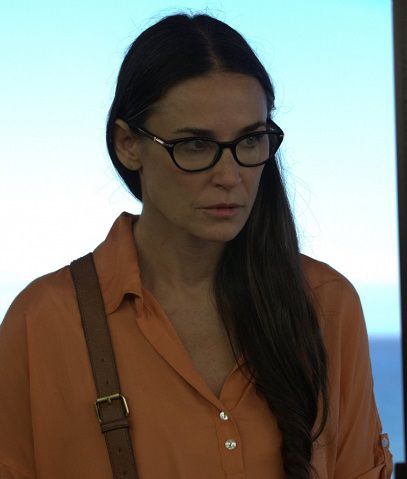 Demi in 2017. She has two movies coming out this year if you’re interested – Love Sonia and Rough Night.

You may have noticed her cheekbones have become considerably more prominent below, maybe a sign of a facelift? Too early to tell for us. 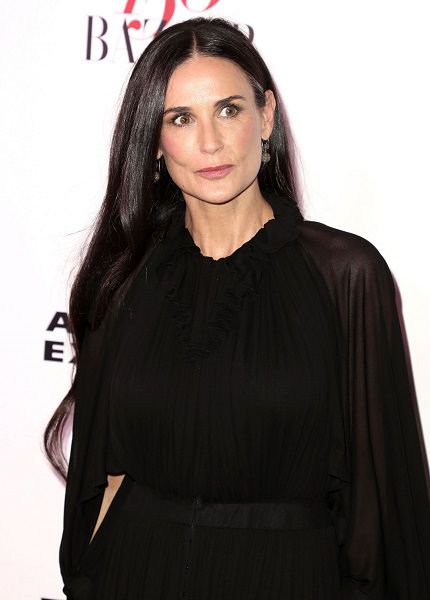 Has Demi Moore Had Plastic Surgery?

Has Demi Moore really become the latest celeb to go under the knife? DO YOU BELIEVE the photos? TELL US in the comments.