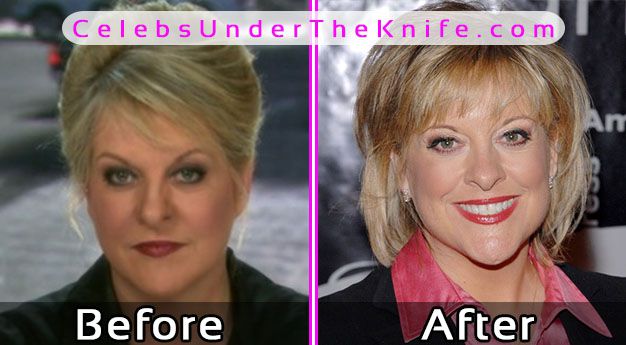 Who the f is Nancy Grace? Most famously, she a legal commentator in America. Less famously, the’s a television host, journalist, and former prosecutor. She’s surprisingly starred in a number of TV shows as well. Including Dancing With The Stars, Law & Order, Hancock, and even on of our favorites – The Wire!

She’s been active on the scene since around 1996, weaving in and out of the media spotlight. She’s been quite the controversial character, landing depictions of her on The Onion, SNL, and Gone Girl.

But all that doesn’t matter. We only care about the PLASTIC SURGERY SPECULATIONS. Take a look at her nose in the before and after photos above, see any changes? WE DO.

What about her chin? DING DING DING. Man-made alterations have occurred to this woman’s face through the hands of a surgeon and his tool – the scalpel.

Has Nancy Grace Had Plastic Surgery?

Has Nancy Grace really become the latest celeb to go under the knife? DO YOU BELIEVE the photos? TELL US in the comments.