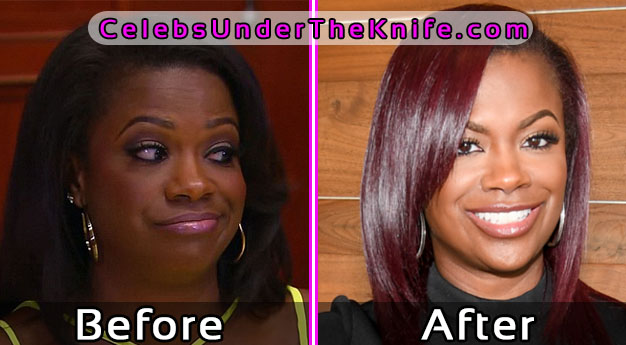 Fans of this 40 year old American singer and actress might have never guessed that she got breast implants if they never saw her on the big screen while she was young. Kandi has starred on The Real Housewives of Atlanta and is a former member of the group Xscape.

The breast implants were a not-so-subtle change to her appearance. Kandi’s breasts do not look natural and are perfectly symmetrical which further leads many to believe that that she received implants to make herself seem more attractive.

Kandi’s husband also snapped a funny photo holding a breast implant shortly after marriage and soon Kandi was seen to have enhanced her breast size which makes the surgery even more obvious.

Looking back at Kandi when she was in her early 20s and now, her breast size seems to have grown significantly larger since then.

Has Kandi Burrus Had Plastic Surgery?

YOU’VE SEEN THE PHOTOS! What’s the verdict – Has Kandi Burrus has plastic surgery? Voice YOUR OPINION in the comments!