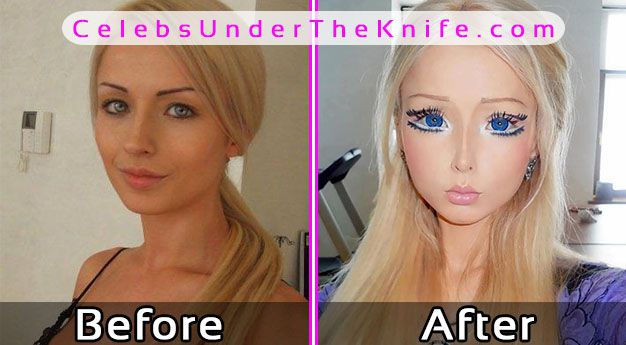 One of the most insane transformations you’ll see on this site is right here with Valeria Lukyanova. The Ukrainian-born model and entertainer has taken going under the knife to a whole new level. How? She’s dedicated her life to becoming the real life Barbie. No, we aren’t kidding.

Jus take a look at the before and after photos above. The plastic surgery, botox injections, face alterations, and breast implants, are all surgical procedures which she’s undertaken to complete her transformation.

Valeria Lukyanova has received worldwide attention after photos of here almost non-human like body started to surface online. However, only in 2013, was she shot into the limelight after Vice ran a full-length documentary on her life’s journey titled – Space Barbie.

She’s revealed to multiple news outlets her strange and wonderful past. Which included times in her life when she was a goth who practiced witchcraft. Call it what you want, but she’s had a pretty damn interesting life!

Her dedicated to the Barbie life has recently changed, however, as she’s been snapped showing off her muscles after revealing she wants to become a ripped gym bunny instead. Who knows what she’ll transform herself into after another 5 years.

Has Valeria Lukyanova Had Plastic Surgery?