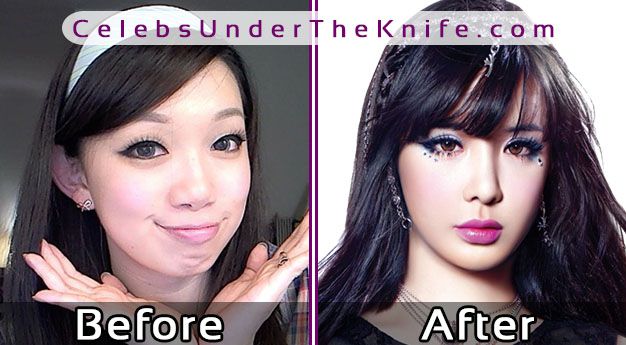 Born in the hustling and bustling capital of South Korea – Seoul, on March 24th, 1984, Park Bom has been one of KPOP’s quickest female stars to rise to the top ranks. She first started her singing career in 2005 after she was accepted into YG Entertainment following three years of continuously auditioning for the company. However, just recently in late 2016, YG entertainment announced Park had not renewed her contract with the company – ending the 12-year engagement. It’s been over those 12 years since she started singing which has lead to many fans to wonder whether the extremely noticeable changes in her face have been caused by plastic surgery or not.

Although she joined with YG Entertainment and had featured alongside a number of singers on their tracks, it wasn’t until 2009 when her career really took off. Once she was placed as the main vocalist for the female group 2NE1, she was able to gain millions of fans and followers worldwide as the group’s songs hit the world’s ears. As you know, the rest is history. Park Bom’s face (and voice!) is now one of the most widely recognized in Korea, if not the KPOP scene across the whole world.

Of course, having such a highly recognizable face means many people know exactly what it looks like from simply looking at it for so long. And it’s for this reason we suspect many of her followers are starting to question whether she’s had cosmetic surgery or not. In particular, many of them are wondering about her nose job, chin reconstruction, lip injections, and possible eyelid alterations.

Over the past few years, the surgery allegations of going under the knife have started to dramatically increase. This may have been caused by Park’s drug scandal in 2010. Park allegedly tried to smuggle drugs into South Korea by sending prescription medicine from the United States (which is illegal in South Korea) to her mother and grandmother. The envelopes were intercepted by the police and almost immediately, rumors started to spread like wildfire.

However, in a statement released by her former CEO at YG Entertainment, Yang Hyun Suk, he explains the following:

While it’s become a situation where I have no choice but to reveal this, Park Bom had, until four years ago, continuously taken medication prescribed to her by an American university hospital. Due to a busy schedule, she was unable to return to the States for some time, and in the process of having her mother and grandmother receive the medications through post for her, it was stopped at customs, as amphetamines are banned in Korea.

During the scandal, some fans may not have been made aware the drugs were prescribed by a doctor, and only paid attention to the initial rumors. This could have cast a cloud of Park’s image, leading to fans wondering if she’s being true to them in other areas of her life, such as lying about her plastic surgery. 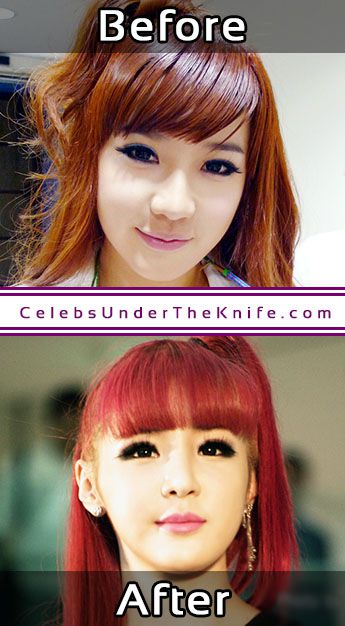 Take a look at all the before and after photos of Park around this post. In just about every one of them, you can see a huge change in her nose from one image to the other. The before photos in each of them show a wider, fatter nose, with the nostril flaring quite a bit around the bottom. As well, the base of the nose can only be seen to be quite small in comparison with the overall structure.

Following the examination of the before pics, take a look at the after’s. Structurally, it has changed completely. The whole width of the nose has been dramatically decreased, while the base as well has been lifted to allow for a more natural ‘western‘ look. Lastly, the nostrils can be seen to be flaring far less than before the rhinoplasty. Overall, it looks like there are some clear signs indicating she’s probably gone under the knife for a nose job.

It’s in the human anatomy for the nose to never stop growing and in Park’s case, she seems to have gone the opposite way! The width of her nose has decreased – seemingly impossible with a basic understanding of the human body. If that doesn’t convince you of her surgery, we don’t think anything will.

One’s environment can also play a part in shaping the way someone looks. The New Yorker recently published an article titled:

Why is South Korea the world’s plastic-surgery capital?

Seoul, South Korea comes in as having one of the highest rates of plastic surgery per capita in the world. With an estimated 20% to 35% of all women in the city going under the knife for a procedure of their choice. Even higher for women in their 20s (which Park was just in) – it’s been thought around 50% of these women has received plastic surgery.

As such, living in a city with such high surgery rates, it’s no wonder many people are wondering whether Park’s joined the club and gotten plastic surgery. 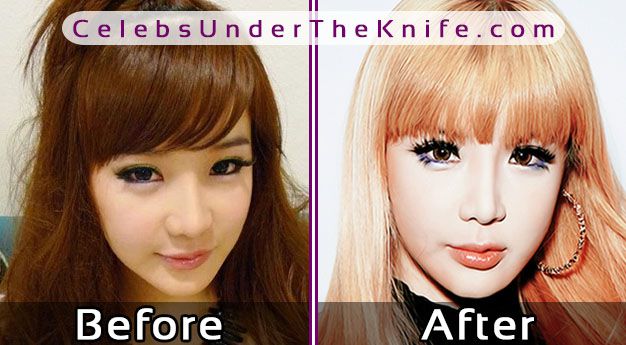 The nose job isn’t all, no. Whilst we were looking for the before and after photos of Park, we noticed her lips were changing drastically from one side to the other as well. In all the before photos they were thinner and far more natural looking. Swing your eyes to the after photos and all of a sudden they’ve dramatically increased in size. How could this be?

Unless Park’s been gifted with some mutant genetics which has caused her lips to suddenly increase in plumpness and thickness around the age of 26/27, it’s the only answer. Again, lip injections are one of the most commonly requested procedures for women in South Korea, particularly those in Seoul. Typically, collagen or hyaluronic acid is injected in the bottom lip, top lip, or both to increase their size unnaturally. You can find out more on the types of lip injections here.

In light of some recent photos on her Instagram account, many fans have been directly questioning the former KPOP 2NE1 singer on whether she’s injected her lips or not.

However, more loyal fans were quick to respond to the accusations with the following statements:

Stop talking about the plastic surgey, she said that she has NO MORE PS and it’s true, maybe, she looks different ‘cuz she used some effect of ‘ Snow ‘ and so she looks different, but probably she put the emoji ( the bear ) on the logo of that app ( Snow ). she will show her beautiful ( as always ) face again and you will see that she’s not changed SINCE 2015. – harooikonic

It looks like she’s confirmed she simply had surgery but not on specific types such as the nose job or lip injections. The rumors of her plastic surgery have been spread so far and wide now, sites like IDOLATOR stated they consider Park Bom, along with Heidi Montag, ‘plastic surgery junkies’. Not a nice thing to be called!

So – you’ve read the evidence, taken a look at the photos. Now it’s time to make your decision! Let us know in the comments below whether you think Park’s had some sort of plastic surgery or not!

Ok – last one! And this is a fun fact – Park’s English name she used whilst she was studying in the United States was Jenny! 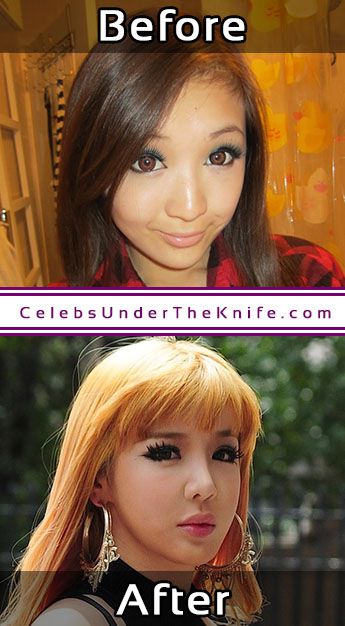 Has Park Bom Had Plastic Surgery?

YOU’VE SEEN THE PHOTOS. READ THE DESCRIPTION. Do you believe? Has Park Bom really had plastic surgery?